We all have a smorgasbord of personality traits, a preferred style or preference for decision-making, and a values system that governs (or at least shapes) our choices.

As I continue my series that looks at the common thread between the results of various interests, style and personality tests (validated and otherwise) that I've taken over the years, I thought it might be helpful to revisit the results from the MoralDNA™ test.

I discovered the MoralDNA™ test at the beginning of 2014. I had been assigned to teach a course in mass media ethics, which I'd never taught before. I've had many students in our major mention from time to time that they like taking personality-type tests so I went looking for an online version of the Ball-Rokeach values assessment and ended up going with the MoralDNA™ assessment instead. (I didn't want to know the students' results. I just wanted them to take the test to provide a foundation for what might be potential blindspots as we discussed ethical decision-making frameworks and ethical challenges in the workplace).

How the MoralDNA™ Test Works

Professor Roger Steare, known as The Corporate Philosopher, and Pavlos Stanboulides, Director of Psycholate, developed the MoralDNA™ test as a way to assess the relationship between decision-making styles and moral values.

The assessment covers three areas: Decision-making preferences, personal vs. work life distinctions, and moral values. Scores in these areas are used to place you into one of six archetypes or “characters” within the MoralDNA™ spectrum: Philosopher, Judge, Angel, Teacher, Enforcer or Guardian.

I look the test in January 2014 in advance of teaching the ethics course.

I was placed in the Philosopher archetype, with a caveat that my results were also closely-aligned with the Angel archetype.

The dominant moral values reflected in my results were: 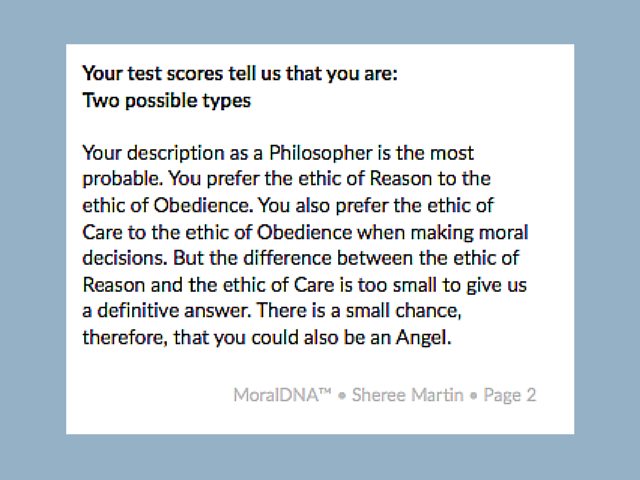 My dominant decision-making style was identified as logic, with love running a close second.

What is a Philosopher?

In the MoralDNA™ framework, the Philosopher is someone for whom virtue is the most important consideration when making choices. This archetype would seem to be aligned with Aristotle's ethical philosophy.

According to the MoralDNA report I received, the Philosopher begins with a consideration of what is most honorable and most courageous in a given situation and then looks at how this choice would affect other people. Only then do rules and regulations come into play.

The main distinction between the Philosopher and the Judge is that the Judge consults the rules and regulations before considering how the outcome would affect others.

The Philosopher and the Judge archetypes are described as being very good at dealing with complex situations and difficult problems.

What is an Angel?

For the Angel, the most important consideration is how a choice will affect other people. They consider values like love, hope, trust and respect. The Angel is somewhat aligned with the Philosopher in that the Angel considers rules and regulations last, before making a decision.

Overall, I would say these are valid results and fairly accurately describe my dominant approach to decision-making. I certainly place personal virtue at the highest level of importance. I focus on doing what seems to be the most “right” thing to do in a given situation and not simply what I might technically be permitted to do under some rule or regulation.

This might explain some of my disgust with the current state of politics (especially in the campaign finance arena).  High-frequency trading and hedge-fund investment practices also bother me.

Just because something is legal doesn't make it right and I believe we do have a moral duty to consider how our actions affect other people. We have a right to look out for ourselves first and certainly that is the survival instinct we all have–and rightly solve. We are not expected to be martyrs for others, but pure selfishness is equally extreme.

I'm somewhat of a libertarian in my political beliefs, and very market-oriented in my economic values but I am most definitely NOT a disciple of Ayn Rand! The whole issue of government regulation is extraordinarily complex because the market is complicated by issues of corporate limited liability, imperfect information, monopolies, oligopolies, and the reality that humans are not purely rational creatures. But I digress—those issues are a subjects for a  different series of posts.