Back in 1996, I launched what today's marketers would call a brand journalism initiative to tell the story of the Alpha Gamma Chapter of Delta Zeta via the “world wide web.”

Websites in the early days (1995-2000) were mostly static brochures, consisting of a few pages, maybe 5 at most. As the chapter's alumnae adviser (and an internet and media nerd), even in 1996 I envisioned the sorority's website as being something more—a cutting-edge approach to organizational storytelling. As it evolved, I used the website to tell everything about the chapter that would seem relevant to current and prospective members, and also appeal to alumnae.

We started the chapter's website in 1996, with a site built by professional web developer. After the first year, the website needed updating, but the developer's fee was too high (almost as much as the original site build). So in 1997, I taught myself HTML and hand-coded an entirely new website. Ultimately, over the next few years, I built out 40 or 50 pages on various topics, all internally linked and cross-linked by category and topics. For 2+ years, I updated the site frequently, to encourage return visitors. I was blogging, even though it wasn't called that at the time, at least not in this context.

In 1996, when I was serving as the collegiate chapter's alumnae adviser,  I convinced the House Corporation President of the Alpha Gamma Chapter of Delta Zeta Sorority to let me hire a web developer to create a website for the chapter.

I had been online since 1990, interacting with kindred spirits who were fans of The Avengers and various musical artists that I liked.  But I hadn't yet ventured into the realm of creating my own website or home base to share information.  I was ready to move beyond interacting with others toward building my own online media presence, and I saw the DZ website as a win-win. I could promote the sorority and learn more about web development.

My vision for the sorority's website led me down an unexpected path to become one of the early practitioners of brand journalism in the infancy of Web 2.0.

I was the sorority’s chapter adviser at the time and I knew that an online presence would give us a channel to tell our own story—a platform through which to expand our PR efforts.

We were always looking for ways to get better media coverage about the positive aspects of sorority life and the contributions the women in our chapter were making to the community through their service work and philanthropy projects. I envisioned the website as a way to side-step the hurdles of getting the campus or local news media to cover our events and successes.

At that point, I’d been actively engaging with others on the internet for several years and I realized that the “information superhighway” (as it was called back then, so quaint today)  made it possible for ordinary people and ordinary businesses to bypass the media gatekeepers and communicate directly with an audience of others.

I knew, firsthand, that the internet was for interactive communication, NOT simply another way to consume media. I'd learned this through the friendships I'd made interacting on Prodigy and other message boards.

So with the blessing of the House Corporation Board President, I hired a local web developer and the chapter got a static website with about 5 pages for a cost of $750.

The site, deltazetabama.org, was professionally-designed and served its purpose. I quickly realized that a static webpage wasn't letting me fulfill the vision I had for how to use the site. It turned out to be more cumbersome (and costly) to update than I’d anticipated.

To Solve A Problem, I Learned A New Skill

By 1997, deltazetabama.org was in need of a major update, but it was relatively expensive to pay the developer to make changes to the site. Each page update came with a cost and those costs added up.

I had begun to learn a bit about website page design and html coding through self-study.  Nothing major, but I wanted my own website and I wanted to know how to create a website. I was mainly studying the concepts, terminology at first, looking at source code,  but I was ready to dive more deeply. I looked at some of the consumer site options like angelfire, but those didn't interest me.

I set up a free site on a service called 50mgs.com and started playing around.

With a bit of hands-on experience playing around on 50mgs.com, I figured out how to make some simple text changes to the sorority website by editing the source code without breaking it.

How? I studied the html code of other sites and a few tutorials and reverse engineered the process. I taught myself.

I hand-coded my media law course lecture notes and posted those to the my tsmbama.50mgs.com site. The students in my course loved having the materials online. This was in the days before UA had Blackboard or WebCT.

I explored and then experimented.

My willingness to step out and take action to solve a relatively simple problem led me toward a greater skill set and into the world of website hosting, domain management, and rudimentary (by today's standards) web design. 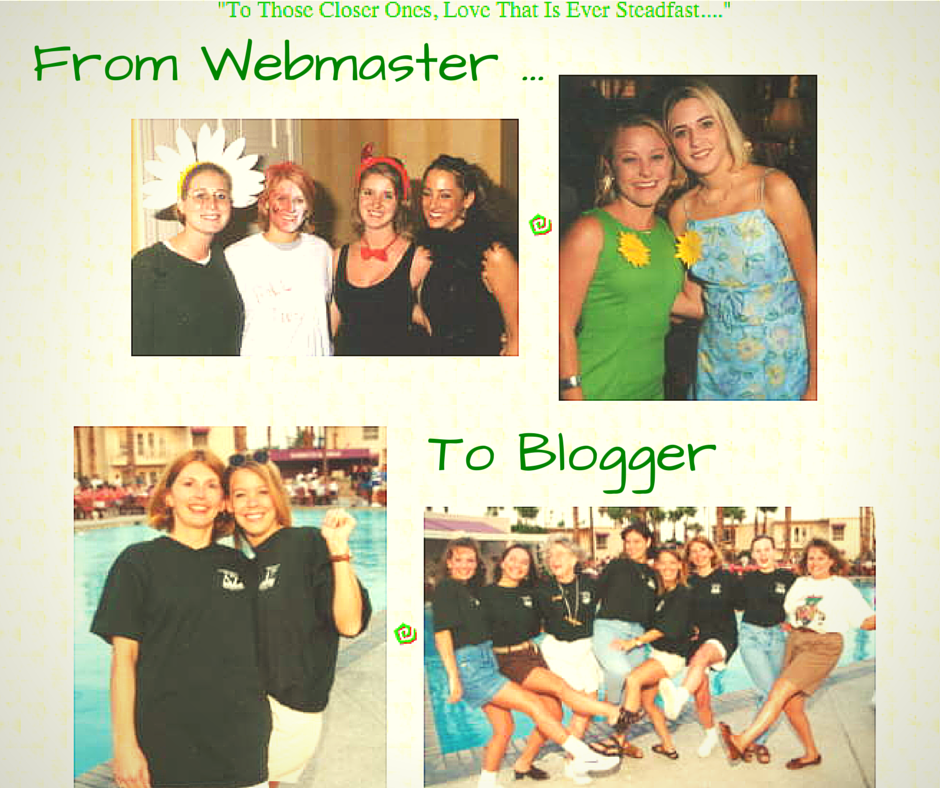 Eventually, my 50mgs site morphed into a full-on content curation project and blog.

In 2000, I was confident enough to develop a new sorority website from scratch. So I did.

I moved the domain to a new website host and built out the website by hand-coding every aspect of every page. [Not efficient, but it taught me some basic coding skills and it taught me the logic and structure of coding.]

I was constantly updating pages to add news about campus success stories, philanthropy projects. I even set up a scrapbook for alumni news pages. Scroll down for a screen shot of one of the pages via the Wayback Machine. It's not the prettiest page in the world, by today's standards anyway. By the standards of 1999-2000, it looked fine.

In effect, I was blogging for the sorority, even though I didn't think of it as a blog at the time. The sorority website probably had 50 pages and hundreds of pictures by the time I moved on to focus on my own first website, where I curated content about The Avengers (the British TV version), Diana Rigg and the Go-Go's.

My responsibilities with the site ended in early 2003 when I prepared to move on to a new phase of my life.

I always look back fondly at the work I did to create and maintain what was, at the time, one of the early examples of online brand journalism.

Here's an example of one of the pages: