Life Is Not A Spectator Sport 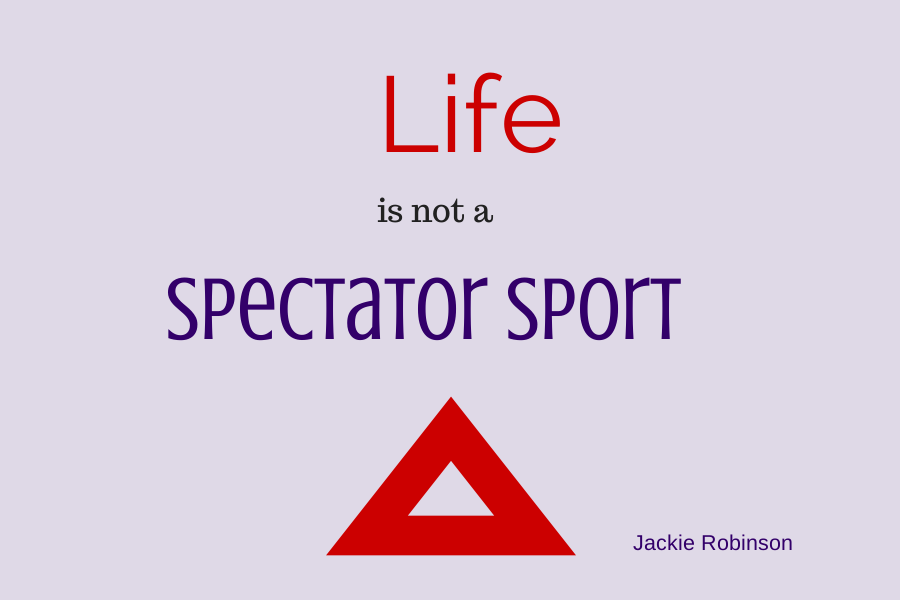 I used to be a hard-core college football fan. I would spend hours each week, reading detailed analyses of games, forecasts, recruiting. And then I spent the better part of one day each week watching games, sometimes in person, sometimes on TV.

I also enjoyed watching other sports. Winter snow skiing. Tennis. Figure Skating. Baseball. Sometimes I watched pro football—mainly the Packers, Patriots or Buffalo, if they were playing in the snow.

But college football was my big time-sink.

By 1994, I knew that writing and media content creation is a big part of who I am. I was getting up at 4 or 5 a.m. to work on a screenplay and starting to explore freelance writing, while continuing to practice law. But it was slow-going. I wanted faster progress. I felt like time was getting away from me.

One Sunday afternoon, after spending the entire day reading every article in two newspapers dissecting the previous day's college football games and watching recap shows on ESPN, I had a lightbulb moment.

I was not living life. I was reading about someone else's.

And so I stopped, cold-turkey.

Around that same time I also stopped reading People, US Weekly and similar magazines.

The less media I consumed, the more I could create. And read. And do.

I finished my screenplay and sold a few freelance stories. I started a novel.

I ran every day. Went out to dinner with friends. Traveled more. Attended plays, in person, not mediated by a screen.

When the internet became a pervasive source for news and frivolity (as opposed to the static web pages of the mid 90s), I was tempted occasionally by the celebrity gossip stories that would appear with a title, a photo and a teaser. But I've mostly never clicked. Maybe 20 times in 10 years.

During those years, I spent time in forums, interacting with people and making new friends. I taught myself HTML and learned to build websites and published the content I created. I had a good run as a freelance writer, for a while.

For 3 years I had a cool website with a two main sections: One devoted to the Go-Go's and one devoted to The Avengers and Diana Rigg. You can see it via the Internet archive: tsmmedia.com. Some of it was more curated and celebrity-focused than I would have liked, but I was creating, rather than consuming. I didn't call it a blog because that term was not as ubiquitous as today. But I updated it my site nearly every day with photos, quotes and news that I found or that friends shared with me. I used iMovie to create Quicktime videos which I posted on my website. This was before YouTube.

To economize in the mid-2000s, I went without cable TV for a year or so. That broke me from network sitcoms and dramas. When I got TV again, I just watched news, documentaries and stuff like Food Network.

Then I moved into a neighborhood where DirectTV wasn't an option and I couldn't get Comcast to show up for an appointment, so I just went without TV for another year. And I discovered that I was much less anxious about the state of the economy in than I had been when I was constantly watching cable news.

A few years ago, I moved again and returned to DirecTV. I discovered that I no longer cared much anymore about watching TV. I tried. Kept the service going for 2 years. But it mostly served as background noise.

I'd filled the years without TV by reading and writing and running and hiking and growing things and cooking.

And getting reacquainted with myself.

In the years without TV, my mental clarity started to return and I really honed in on where I wanted to go with my life. I found that mindless television, even in the background, was a way to escape from my life, not design and live it.

Before I gave up cable TV the second time, I'd already stopped watching televised sports. That happened as a result of the transition from college sports and college sports media as something reasonably related to athletics to an industry driven mainly by ratings hype and profit opportunities. Nothing wrong with quality and profit, but today televised college sports is more of a Disney World spectacle or reality TV sideshow. I love the game and the strategy.

I prefer reality, not reality TV.

Just over a year ago, I canceled DirecTV again. I've never missed it. I'd barely watched any TV in the previous year. So-called “news” on cable TV had turned into reality-TV with a political spin.

In the past few years without regular cable TV, I've reignited my passion for writing. I've explored my life's vision and purpose and charted the common themes.

Media is one of those common themes and media has always been a huge part of my life, but as a creator and engager, not a consumer.

I still watch movies, documentaries, YouTube. But not passively. Not to escape or daydream.

I consume with purpose: I watch to learn, to be inspired, to improve a skill, to laugh.

Life is not a spectator sport.

Are you in the game?

I'd love to hear your thoughts. Leave me a comment below. Let's start a conversation about rising about a mere consumer culture into action and doing.