Ideas & the Revival of The Ben Franklin Follies 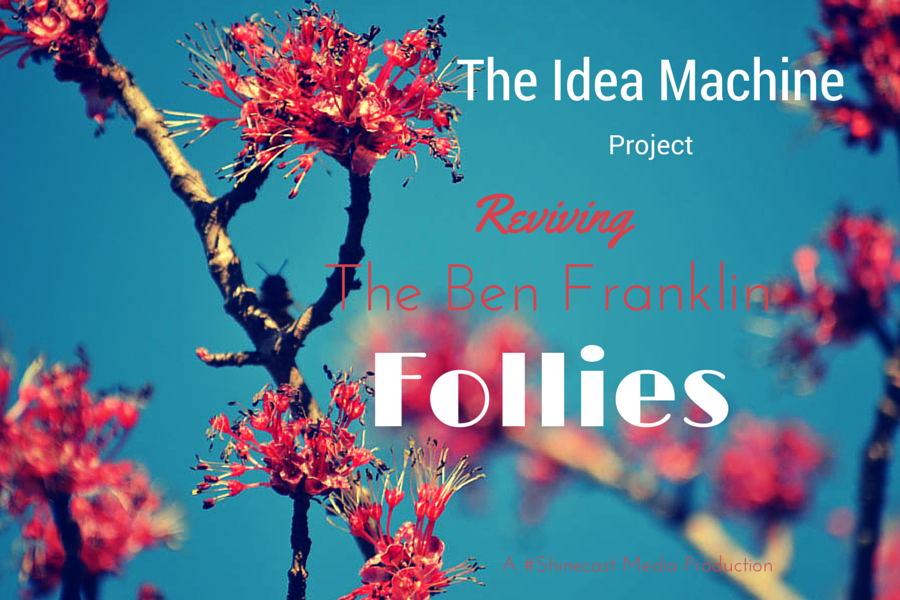 This is still the tagline of my Google Plus profile.

For a long time, I used this tagline on all of my social profiles, but starting around 2012 or early 2013 I updated most of the bios to move away from promoting myself as an idea machine.

I decided to play down that part of my being, even though I've always been an idea machine and I recognize the value of my skill in generating and connecting ideas.

That said, I have struggled to communicate the value of my idea-generating capacity to the rest of the world.

Needless to say, I was pretty excited to recently hear that James Altucher thinks ideas are the currency of the 21st century. I hope he’s right.

[Tweet ” I agree with @jaltucher “Ideas are the currency of the 21st century.”]

A few weeks ago, I learned that Claudia Altucher (James’ wife) had just published a book called Become an Idea Machine (affiliate link) building on James’ practice of generating at least 10 ideas a day.

At first, I was like “I don’t need to read a book about idea generation.”

I’m the person who has a pen and notepaper in the cup holder of my car so I can scribble down ideas as they come to me when I’m in the car. Some of these ideas get transferred to a moleskine that is specifically dedicated as a repository for my random ideas.

A sidebar: I’ve learned through experience that ideas I save digitally are usually lost to me, although I am trying to do a better job of tagging things in Evernote. I want my ideas in a place where I can peruse them offline. I love my tech, but I also love words on paper. Real paper. Anyway, I digress.

Around the same time as I started to remove “ideas” from my social profiles, I discovered James Altucher through Chris Brogan's podcast and read James' book Choose Yourself. [affiliate link]

For a while, I formally implemented James' 10-ideas-a-day practice, but eventually shifted back into a more random approach to recording the ideas that continuously flow through my brain.

Despite my commitment to ideas and idea-generation, I decided that perhaps others didn’t value ideas as much as I did.

At the same time I started reading James Altucher’s blog, I was repeatedly hearing others say that execution is what matters, that without execution ideas are just fluff. So I thought I’d just keep my skill at generating ideas to myself and pursue those that interested me and seemed within my capacity.

Even though I began to change the public language I used to describe my talents, skills, interests, abilities, the fact remains that I am an idea machine and always have been. Ideation repeatedly shows up on StrengthsFinder and other similar assessments.

Like I said, initially, I didn’t see much reason to buy a book that helps me become an idea machine.

I already generate umpteen ideas every day. My first thought was that I need more focus, not more ideas.

But the reality is, I’m not systematic about my idea generation.

The more I thought about it, the more I realized I might benefit in some way from working my way through Claudia’s 180 day plan.

One thing I’ve come to realize over the past year or so is that anything harmless that triggers a bit of psychological resistance might be something I need to take a look at.

I decided I would spend $2.99 for the Kindle version of Claudia’s book [affiliate link] and follow along. Make it a game. Use it to get my creative juices flowing around topics that I might not think to ideate about.

I've now started to formally do the 10-ideas practice based on Claudia’s topic for each day. I’m sharing these over at The Ben Franklin Follies, if you care to follow along.

Regardless of whether or not you buy the book or care about the Shinecast…. James and Claudia Altucher are onto something…..

Ideas DO matter. Ideas have value, even without execution or “results.” It takes practice to generate ideas and more practice, in a systematic way, is likely to result in better, more useful ideas.

Creativity is like a muscle that gets stronger with use.

[Tweet “Ideas depend on creativity and creativity gets stronger with practice.”]

The practice of coming up with new ideas each day can be a valuable practice, even if you never implement the ideas. The ability to generate ideas quickly will help you solve unexpected problems when they arise—I've seen the value in my own life, especially when I've needed to improvise a situation on the fly.

I suspect that those who pooh-pooh the value of pure ideation as a skill are those who aren't very good at coming up with new ideas.

Hope you'll join me in working through Claudia's book.