Posted by Sheree on Mar 5, 2015 in Grow, Idea Machine Project | No Comments 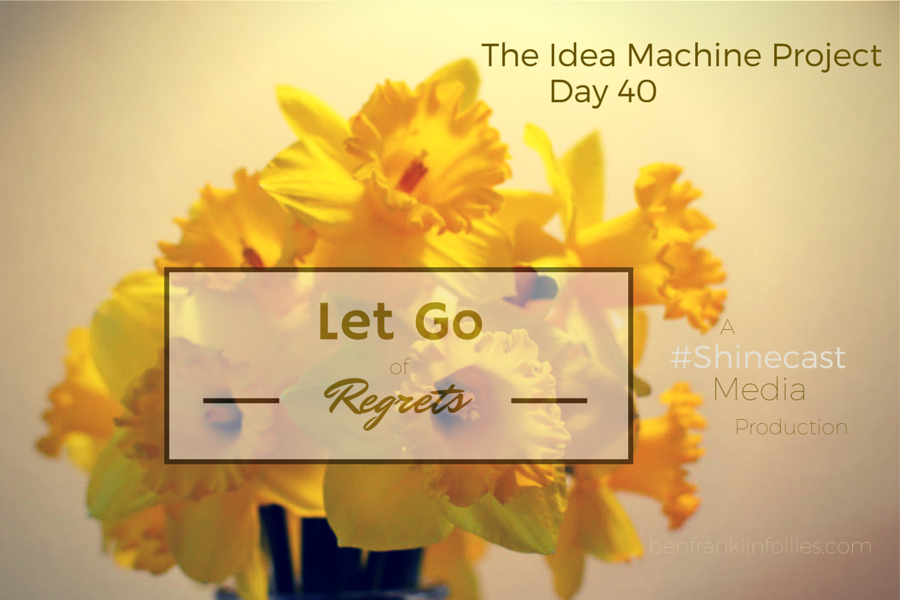 For Day 40 of Become an Idea Machine, Claudia Altucher prompts us to list 10 regrets to let go.

In my own life, I've been pretty good about letting go and forgiving others if I feel I've been hurt or wronged in some way. I learned a LONG time ago that holding on to resentments does nothing except hurt me.

I can be tough on myself. Despite my efforts to let go of perfectionism, I still have to deal with the fact that I want to be perfect and I hold myself to a high standard of performance.

I'm still grappling with the fact that I allowed a strong beehive to starve in late January. How didn't I see it? Why didn't I open the hive, even despite the cold to make sure it was ok. Why did I rely on outside appearances, since I did know better. Anyway, I'll start with that regret. I have to let it go, learn from it and move on.

I started my first “blog” in 1999 and over the next 2 years built up a huge following. By 2001 I had a lot of daily traffic, given the topic and the fact that I was doing nothing to promote it. I ended up losing the domain in late 2003 and, as a result, I let the website die. I've written about how this happened in other posts. The site was tsmmedia.com. You can see a lot of the content on the wayback machine.

Although I've moved on, I still sometimes think “what if” and that's a sign that I've fully let go of my failure.

At the height of tsmmedia.com, I could have monetized it. I can't believe I didn't try. If I'd started making money from the site, I wouldn't have taken the job that led me to use that email address for the domain and then I would not have lost the domain.

A trail of what-ifs is a sign that I'm holding on to regrets…..

I had a great teaching job at Oklahoma State 2003-2007. I wasn't happy in Stillwater, so I started looking for another position. Since I didn't have a real mentor with experience in academia, I didn't realize that leaving a position before getting tenure is often dicey proposition.

In any event, I thought a return to the practice of law to build up a practice with clients in the tech industry and “new economy” would be a great idea. Turns out, the area I was in wasn't quite ready for that and then the bottom fell out of the economy anyway.

I wasn't happy doing the same type of legal work I had been doing in the 90s, so I started looking at a return to academia. Anyway, I've moved on from regretting this, but again I sometimes wonder “what if….”

In this case, though, I do think I've let go because if I hadn't left OSU, I would have missed out on a lot of great things that have happened in the 7-1/2 years since then. I also probably would have lost my dad, since it took returning to Alabama to discover I needed to help him.

5. Not Taking the Other Offer

In June 2009, my gut told me I'd made a terrible choice and suddenly, out of the blue, I had a new opportunity. Just the opportunity I'd been hoping and praying for.

And yet I didn't take it. Ultimately, I decided I'd given my word to Samford and that it would not be ethical to withdraw from that position at the last minute. I turned down the much better offer for what was, essentially, the academic job I'd been dreaming of.

I'll skip the details here, but it's clear that I made the wrong choice in 2009, although I have made the best of the choice I made. I've moved on.

When I practiced law on my own, I was very risk averse. I don't know that I “regret” that, but I've learned over the last couple of years that I've probably played it safe in many areas of my life, even though to most people I've been willing to take risks (like leave secure jobs when I felt stifled).

The thing is: I take one risk and then rarely go big after I take the risk. I pull back. That's something I've realized over the past two years.

I used to buy new videos and music CDs all the time. At one point, I had thousands of CDs. I sold off 2/3s but I still have at least a thousand music CDs. I also have way too many DVDs.

I try not to translate how much I spent into today's dollars. I love the music, but surely there was a better way to listen to it. No, not in those days. Radio stations controlled airplay and there was no Pandora or Spotify.

The music I liked most was not available at yard sales, either. I wasn't looking for top 40, I wanted alternative, non-mainstream stuff.

My grandmother died in July 1982 and my mother bought her 1979 Chevy Malibu from her estate. That was my car for the next 3 years. I really liked it but it was totally a late 70s/early 80s car. One day, I had car trouble and I got risk averse. And I also felt slightly embarrassed by my big, old 70s car that was a fuel hog. I ended up a new car that I had to finance. Having that car payment was a huge financial setback at that time. It set up a series of bad financial choices during the mid-80s.

I've long since learned my lesson from that, but the repercussions left me financially strapped for a long time.

I sometimes ask myself whether I'm glad I pursued a Ph.D. and embarked on a career in academia. I had not intended to work in academia when I enrolled in the program. I was going for a Ph.D. just because it was a terminal degree, and I was advised that a Master's in PR would be a waste of time.

I am ambivalent about the Ph.D now. It's been good and not-so-good. I'm very happy with the knowledge I gained, especially in theories related to leadership, management, psychology and sociology of change. But I could have gained that knowledge at a much lower cost.

The reality is this: I made the choices I made, so I have to make the best of where I am, not look back with regret.

10. Not Launching my Online Businesses Faster

I've been working to get several online business venture off the ground for the past 18 months. It's taking me way too long–in part because I am a perfectionist and I don't want to make any mistakes like I made in 2002-2003.

On the other hand, in some ways it's been a good thing that I've let the Shinecast idea germinate because it's taken shape in ways I didn't envision. The biggest delay that I regret is not publishing The Happy Life book yet and not getting 7 Days of Real Food out last Fall. And Teach Social Business? I should have been promoting in 2 years ago, when I first published the content there. Instead, I keep playing it safe…..

I'm sharing publicly here because I hope others will see that playing it safe and holding back due to perfectionist tendencies, fear and/or a desire to impress others is not the best way to achieve the life of your dreams.