How I Became A Beekeeper 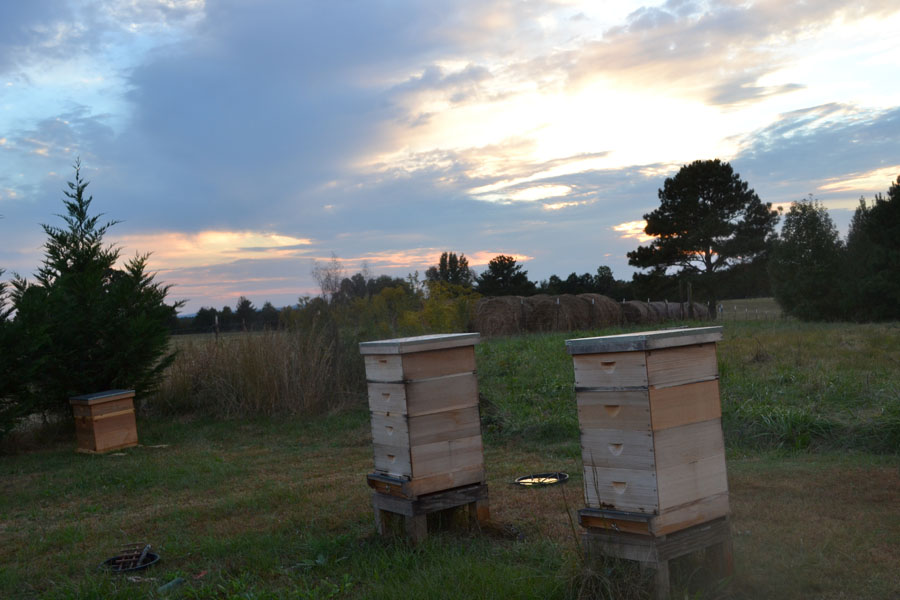 Nature fascinates me, inspires me, leaves me awestruck.

I think beekeeping has always been in the plans for my life.

I grew up eating honey. I was a toddler before the warning labels appeared on honey jars and I've eaten it for as long as I remember.

Probably as a result of my love for honey, I also had a particular fondness for The Tales of Winnie-the-Pooh.

From time to time during my childhood someone in my family, usually my great uncle Oscar, would rob a wild beehive and share the honey with us. One time I remember being at my grandmother's when Oscar brought a dishpan of wild honey to her. It was super rich, dark as amber. A few dead honeybees were still trapped in the honey. I studied those bees and wondered about robbing a hive someday.

I spent a lot of time reading during those years: The Foxfire Books, My Side of the Mountain, and the early 20th century classic Camping and Woodcraft were some of my favorites. I  dreamed of living off the land.

Fast forward to the summer of 1984. I worked as the lifestyle reporter for the Franklin County Times, a small-town newspaper published twice each week. My main job was to find at least one big feature story for each issue. The last feature I wrote that summer was a profile of a local beekeeper. I visited his bee yard as part of my reporting, but I had to stay at a bit of a distance because I didn't have a veil.

I've always enjoyed buying local honey when I travel or wherever I've lived. During the years I lived in Florida (in my mid-20s) I loved to buy the orange blossom honey from local beekeepers.

As a result of all those experiences and my love for honey, I just knew that some day I'd have a few hives of honeybees.

I'd first heard about honeybee decline around 2004 or so. That concerned me. Also in 2004, I'd purchased three books about bees, honey and society. Each of these took a slightly different approach to telling the history of the relationship between honeybees and humans.

Honeybee challenges combined with my concern over the food system accelerated my desire to become a beekeeper but in 2007 I was moving back to Alabama and not quite settled enough to take on the responsibility of beekeeping.

Eventually, though I bought a house in Birmingham I started thinking seriously about getting bees, but not just to provide honey.

I love learning and beekeeping seemed like a great way for me to combine my curiosity about nature with my need to always be learning something new, while doing my part to help honeybees (and humans at the same time, since much of the food we eat requires their pollination services).

In 2012 I decided that 2013 would be the year I became a beekeeper, so I set out to learn as much as I could ahead of time. Beekeeping has its own vocabulary, and then there's the range of equipment options, philosophies and bee biology. The more I delved into beekeeping the more I learned how much I needed to learn.

I attended two conferences for Alabama beekeepers and, in October 2012 at one of those conferences, I met a beekeeper who spoke of bees more like the fascinating creatures they are and less like industrial machines that needed prophylactic chemical treatments. I asked Keith if I could get his email and if he might be willing to sell me two nucleus hives the following spring.

I'll leave out the details of the months between November and April. Suffice it to say the closer I got to the point of getting my bees, the more I realized how little I knew. I almost backed out.

But something deep within me said I had to take the plunge. That still, quiet voice inside told me that honeybees are part of my destiny.

I picked up my two hives late Sunday afternoon, May 26, 2013 and took them to the farm.

Thus began what has been perhaps the most rewarding experience of my life so far: Doing my feeble bit to provide the framework and shelter the honeybees need to fulfill their own purpose for being here for such a short time.

I study them when I open the hive, I ponder their work as I stand to the side and watch them come and go, loaded with pollen and nectar. The foragers never pause to rest. Occasionally the guard bees will look at me, curiously. Worker bees in the hive will also peek up at me if I have to remove a frame for an inspection. Some of the foragers would hover around me when I'd  be in the field picking a vegetable. They seemed to know that I was the keeper who visited their hive. When I put up my tent to camp in mid-October I had leave the flaps zipped because the lady bees seemed to think it was a giant flower.

The experience has been, so far, more amazing than I ever anticipated. I just hope that I can do the right things, no more, no less.

“Thou seemst — a little deity.”

Ode to the bee (Fifth century, BC)

Cross-posted at my blog devoted to my beekeeping activities: Beekeeping  Journal