That's it. I think I'm curious about personality and Strengths-Finder tests. Always have been, at least since one of the career assessment tests I took as a young adult matched me with journalist or air traffic controller.

In grad school, I discovered Albert Bandura and have been fascinated by the self-efficacy hypothesis and how that plays into life-successes.

The introvert-extrovert dichotomy has intrigued me the most. If I had to classify myself, I'd say that “in real life” I tend to be an introvert because, all things being equal (most of the time), I like to stay home and read a book. I need down-time to recharge my batteries, and I enjoy my own company. But another side of me also enjoys meeting new people and I'm very comfortable when talking to strangers.

It's much harder for me to make small-talk with people I have some regular familiarity with than it is for me to have a conversation with a stranger. I'm extroverted with strangers, more reserved with casual, ongoing acquaintances. Is that strange?

I have no problem getting on a plane and flying to another part of the world and making new friends. I love chatting up new friends online. But once it goes beyond the acquaintance level it's much more difficult for me to sustain the relationship.

I think the internet enhances my extroversion, rather than the other way round.

What's that all about?

When I returned to law practice in 2007 after a 5-year hiatus, I took the Strengths Finder 2.0 test. All of the lawyers were asked to take the test so we could use these strengths to develop teams to maximize efficiency and effectiveness in representing clients.The results of that 2007 version of my Strengths Finder 2.0  test revealed my top 5 strengths were:

In 2012 I took the Strengths Finder 2.0 test for  a second time, as part of a sustainable food systems leadership training program I went through. The results were quite similar, although not identical: Ideation, Strategic, Learner, Maximizer, Achiever.

Intuitively speaking, I think the 2012 results are more accurate.

I've taken the Meyers-Briggs tests a couple of times. I usually score mildly-introverted, strongly intuitive , but less definitive between thinking/feeling. I'm pretty logical, but also open to making decisions based on the situation.

For the most part, I tend toward introversion, but never strong. I'm always borderline between introvert/extrovert (lean introvert) and more inclined to special circumstances (“feeling”). Regardless of when I take the test, I score pretty strong as Intuitive and Perceiving.

Specifically, the Meyers-Briggs Personality Indicator® test is designed to measure attributes that evaluate your personality based on these criteria:

In the celebrity-version of the Meyers-Briggs tests, I scored INFP:

What do you thing? Legit or not? Id love to hear your thoughts. Scroll down past these infographics and leave your comments.

In the world of Harry Potter, I'm a cross between Hermoine Granger, Lorna Lovegood, Ron Weasley and Sirius Black. No disagreements there. 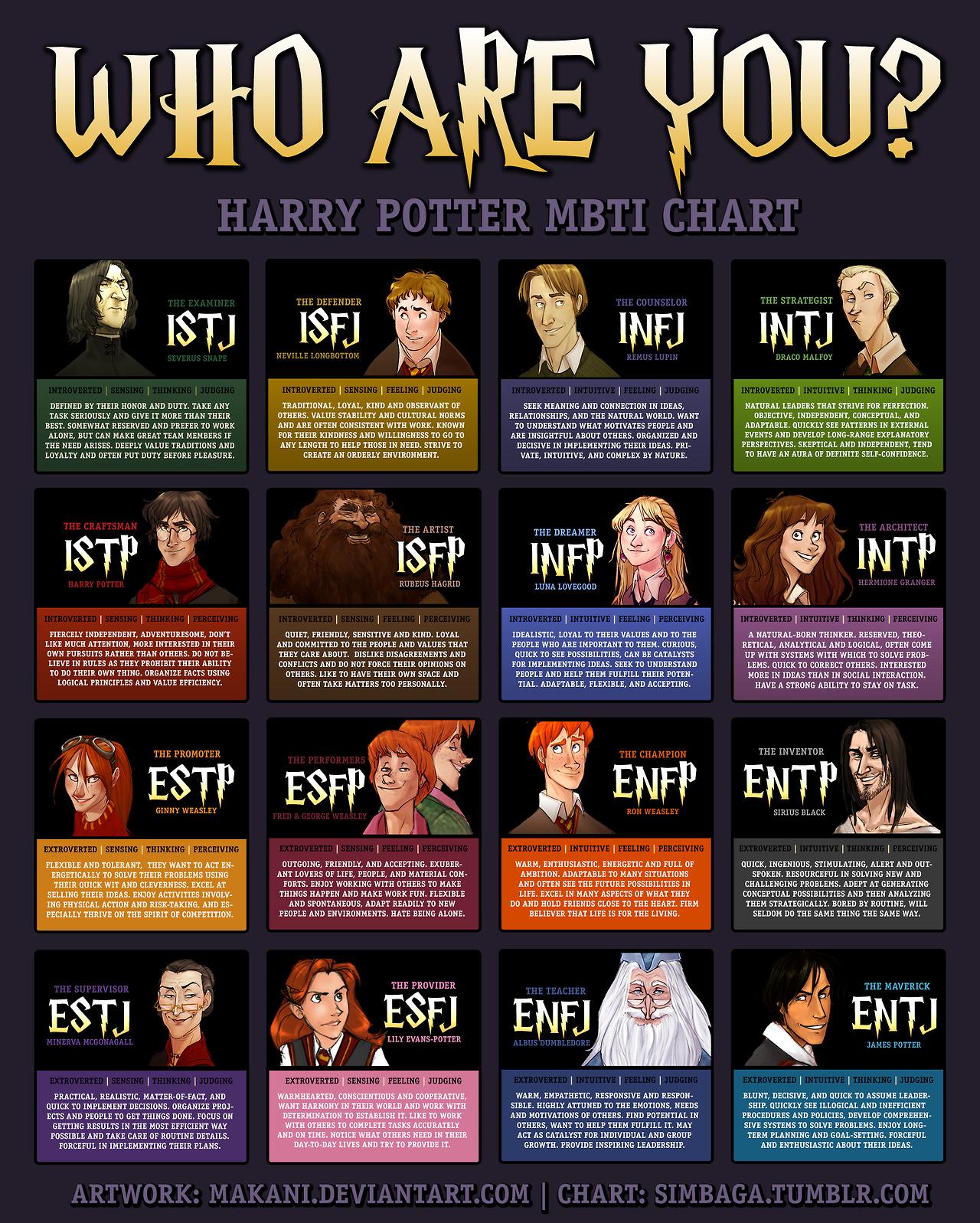 According to the Star Wars version, I've matched with Luke Skywalker, Yoda, Qui-Gon Jinn and R2D2. Dig it!

If you're into Meyers-Briggs and Star Wars you'll enjoy this infographic:

Explore more infographics like this one on the web's largest information design community – Visually.

In the land of Downton Abbey, I'm somewhere between Matthew, Tom, Anna and Thomas. Although I don't dispute those results, I'm quite not as excited about them as the Harry Potter or Star Wars match. (I think it's the Thomas bit–he's too much of a conniver and manipulating opportunist). But I do LOVE the show. My friend Rachel who blogs at GraspingForObjectivity created the Downton Abbey MBTI infographic. If you like, it send her some social sharing love. 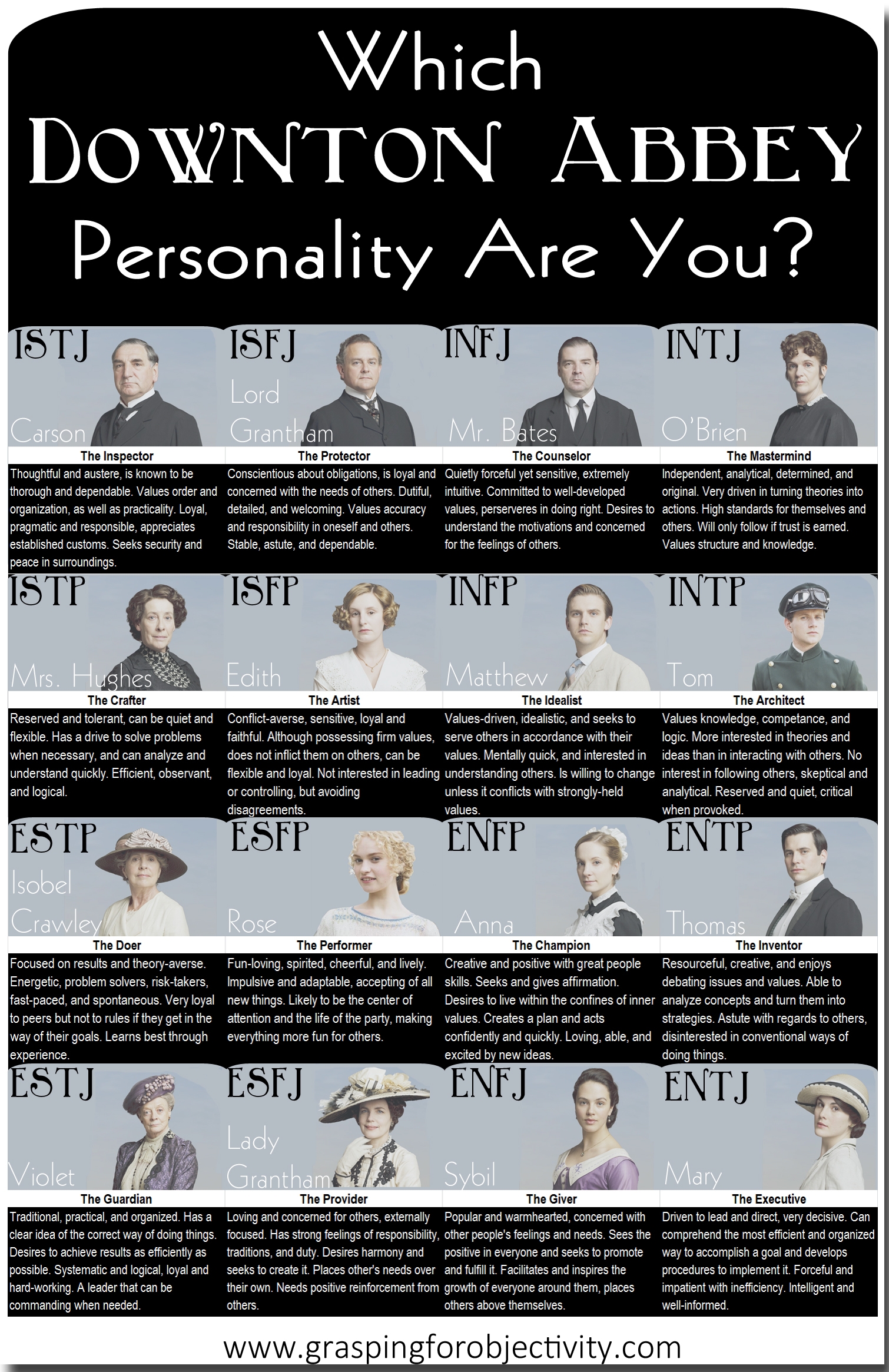