Don’t Settle for Less Than Your Dream 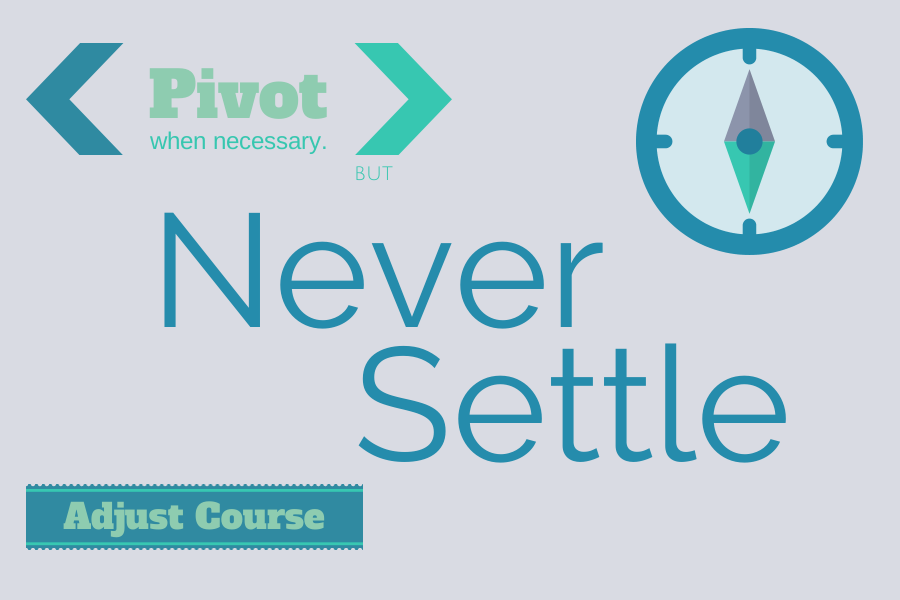 Are you ready to give up on your dream? Do you feel knocked down by forces seemingly beyond your control? Does your path seem blocked by brambles, briars and boogey monsters?

Are you in a situation that hasn't turned out like you expected?

I've been there. Multiple times.

And I've learned is that I must push on, adjust course when necessary and, most importantly, never settle.

Life is a journey

Your dream, your vision, can only become reality by setting out on this journey and following a path that may not be on a map. In fact, the path to fulfilling your dream should not be on a map. If it is, you're following someone else's dream. If you can see every step to your destination, you may want to revisit your vision.

Settling for less is giving up. It means you're stepping off the path.

When I was in law school I had fairly prestigious summer associate experience with an well-established law firm in Miami. I had the opportunity to do securities work. I'd been planning a career in corporate law and I'd loved the course I'd taken in securities law. I spent most of the summer working on real estate limited partnership syndications, assisting with due diligence research and documentation. It might sound tedious to some, but I loved the work that summer.

Shortly after the summer associate program ended I received an offer for a job after graduation. I was set. So I thought. Dream job. Great vibrant city that was experiencing a renaissance. This was at the height of Miami Vice and Miami Sound Machine era. I had friends in the city. Everything seemed perfect.

Law school graduation finally arrived. My car was already loaded for the move and I hit the road shortly after the commencement ceremonies ended.

The first sign that something was amiss: When I arrived at the beachfront lodging where I'd lived the previous summer I found it a bit less savory than the year before. An understatement. The unit I was given was positively filthy. After one look, I told the manager that I wouldn't be signing the short-term lease after all.

I set out across town to look for a decent apartment that I could lease without a long commitment. I was tired from driving and frustrated by the need to find something on-the-spot. Spent the night in a hotel and the next day found an apartment way south of downtown. New complex, nice apartment, unfurnished. I ended up leasing a few pieces of furniture until I could figure out a better alternative. The where-to-live problem turned out to be minor.

Several of us new associates were starting on the same day and had arranged to work for a few weeks prior to taking time off to study for the bar exam. We were greeted with what was, for me, a bombshell announcement: The firm had recently “split” and most lawyers in the corporate division had left the firm to join another group. The firm's primary business was now, and for the near future, litigation, mainly insurance defense.

Hmm. My entire law school experience had been designed to avoid litigation. I had zero interest in doing trial work. I'd prepared for environmental policy, business transactions, securities, real estate, even taken specialty courses in sports and agriculture law. But not trial law. Not litigation.

My dream job was going to be a nightmare.

I tried to make it work. I showed up dutifully each morning, after a 10-15 minute car commute followed by a 20 minute train ride to my downtown Miami office building. I slogged through depositions in medical malpractice cases involving “myocardial infarction.” That's when I learned the medical terminology for heart attacks and other conditions. I drafted legal memoranda on corporate negligence involving accidents in retail establishments.

I attended motion dockets and hearings on motions for summary judgment. Prior to these few weeks, the closest I'd come to a motion for summary judgment had been filing one in client folder in a filing cabinet during my undergraduate prelaw internship. I'd barely been into a courtroom. I'd certainly never been to a motion docket. In fact, I'm not sure I'd ever attended a real hearing in a real courtroom, despite having graduated from law school. That's how disinterested I was in litigation.

I tried. Two years isn't that long, I told myself. I could even look for something else as soon as I passed the bar exam. But I had to get over that hurdle.

Opportunities aren't always what they seem.

Sometime around the third week, I was called in to assist a junior partner on something. I did the research and wrote the motion or memo or whatever it was. He said he wanted me to accompany him to the hearing. OK. No red flags. It was a morning docket call and we took the Metrorail across town to the courthouse. After the hearing, he said he wanted to stop for breakfast. So we did that.

On the train ride back to the office we had to stand up and the partner kept moving around so that his midsection would bump into my hand holding on the pole. At first, thought it must've been an accident and just moved over. But when it continued after I started moving around, I realized that he wasn't accidentally falling into me. It was something more akin to an attempt at bump-and-grind. Became very obvious.

Back at the office, later, he asked to meet with me. He proceeded to tell me way too much about his home and personal life. More than one picture of his wife was on display in the office. He'd requested me as his primary associate and, although he didn't specifically say the words, it was clear that I'd have an “opportunity” to do more than simply write legal briefs and attend motions with him.

I found out from one of the other new associates that this wasn't the first time this guy had made women clerks and associates feel “uncomfortable.”

Welcome to the real world, Sheree.

Within a week, I made an appointment with the managing partner and told him that I could not work with the firm. I used the litigation assignment as my justification. Didn't mention the sexual harassment stuff. Said it would be best if I didn't stay on longer because it wouldn't serve either the firm or myself to fake it. Better to leave now, yada yada.

Barely one month after embarking on what I'd spent the past 7 or 8 years dreaming of and planning for, I quit. And I had to use the money my parents gave me for law school graduation to repay the portion of the signing bonus I'd used to set up my residence in Miami and make a downpayment on a new vehicle.

One of my dreams had been to travel around Europe with a friend that summer. We had purchased tickets and planned to leave on our month-long adventure immediately after taking the bar exam. My parents had given me the graduation money to pay for most of the trip. Since I had to use that money to pay back what I'd spent from the signing bonus, I had to cancel my travel plans.

No trip to Europe after the bar exam. Another dream put on hold.

Instead of having a dream job as a corporate lawyer at a nice salary after a month in Europe, I was unemployed, had a new car payment, no savings and no plan.

I refused to settle.

The choices I made in late June 1987 that year changed the course of my life. In hindsight, I think it was the universe telling me that corporate law was not my destiny. I'll explain why later.