This post is a reflection on a year of brand confusion and my failed strategy for launching the Shinecast® media brand.

You see plenty of blog posts about success stories and how-to-succeed in digital business, but not many about the missteps. This post is an overview into a venture that didn't work out as planned in part due to strategy, in part due to execution, in part due to messaging and, perhaps, in part due to complexity and resource availability.

The best lessons often come from experiences where we don’t achieve what we thought we were going to achieve. I hesitate to call it a failure, because I’ve learned so much over the past year. This post isn’t really about the lessons learned, as such, but more about the road to the missteps.

In 2015, I attempted to ramp-up and roll out the digital media business I’ve branded as the Shinecast®.

The Shinecast® is a brand, first and foremost. It’s the brand I’m using to indicate the source/origin as I distribute the multimedia content through a variety of digital channels. 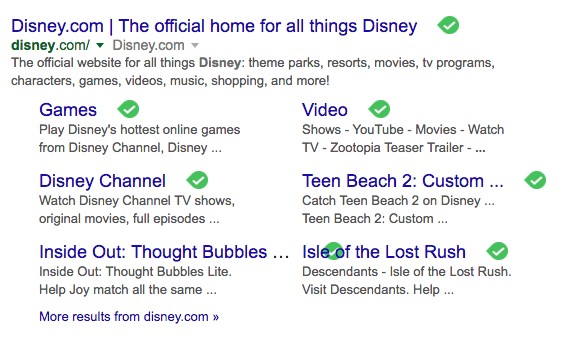 The Disney brand is an umbrella for a multitude of content, product or service categories. We have Disney movies, the Disney Channel, the Disney theme parks, Disney licensed products for children and adults, Disney vacation resorts. There’s more, of course.

As the search engine results in Google indicate (graphic above), some of the Disney brand is digital content, some requires brick-and-mortar visits to experience, some is tangible (clothing, toys, etc.), some intangible (the Disney experience at theme parks and resorts).

The vision for the Shinecast® brand doesn't exactly include theme parks and guided tours, at least not here in the early stages. The initial vision is heavily focused on multimedia content delivered digitally to share the Shinecast messages. Eventually, I have plans for “real world” goods and services related to the Shinecast message.

Shinecast in the Digital Realm

When I launched the Shinecast® brand, my goal was to begin with audio content distributed in podcast format through separate, distinct shows on topics related to the Shinecast message (more on that in a moment) that would help to grow the brand in the audio medium.

Both audio and text-focused digital content would offer messages to help YOU (the audience) Discover, Grow and Shine in various areas of life (health, wealth, etc.).

Once I had the podcast and written content coming out on a regular basis across the various “channels” I planned to venture into short videos.

I started, early on, with the Shine Springs Farm Shinecast, to talk about sustainability topics, growing and preparing real food.

The second podcast I launched was Birmingham Shines, a Shinecast® show about creators, innovators and makers in Birmingham. The goal of that show was to introduce the Shinecast brand and inspirational message of living authentically and doing work that matters.

I added the Ignite Alabama podcast as Shinecast® show #3 to talk about entrepreneurship in the context of an Alabama audience. My research indicated this was an unserved niche. In podcasting, the topic of entrepreneurship in general is oversaturated, but there was no Alabama-focused podcast that I could find on the topics of innovation and entrepreneurship.

I saw Ignite Alabama, and the companion website, as the place where I could provide valuable digital resources and implement a monetization strategy that would provide the funding (and some content) for the “wealth” component of the larger Shinecast® message.

Show number 4, the Discover Grow Shinecast, was the podcast that would combine all the facets of the Shinecast way of life in one podcast for a global (or at least a national audience). I envisioned it as leading the audience along the path to health, wealth, wisdom and happiness.

The whole purpose of separate podcast shows was an attempt to distribute the Shinecast message to targeted audiences, to make it easier to get their attention, and then (I hoped) this would lead them to brand awareness, some curiosity and, eventually, build an audience for the main Shinecast website.

Well, it didn’t work out as I’d planned.

Most everyone in the Birmingham audience saw Birmingham Shines and the Shinecast brand as one-and-the-same.

In the Disney analogy, it’s as if the sum total of the Disney brand consists of The Fox and the Hound. Charming, but not the main point.

Busy, but Not Productive

The more I tried to crank out the content for Birmingham Shines and Ignite Alabama, and promote it properly, the less time and energy I had to write and produce the main Shinecast content.

Moreover, I found it extraordinarily difficult to identify and schedule great guests for the Ignite Alabama podcast. Entrepreneurs in the start-up world are too busy and the business advisers largely don’t “get” podcasting as a medium to reach prospective clients.

I pivoted on the Ignite Alabama podcast and turned to the behind-the-scenes production ideas for the monetization path, but I was ahead of the curve. Most of my pitches were received with this response: “Intrigued” or “great idea” but “not yet for us.”

No one wanted to be first in the Alabama market to spread their message through on-demand audio. Most of the internal decision-makers in Alabama businesses don’t get niche marketing through controlled digital channels  or still need the ego boost that comes with devoting most marketing dollars to mass advertising.

I put the Ignite Alabama podcast on hiatus last year, as I explored a rebranding possibility. I'm still mulling over whether I'll implement the rebranding and relaunch to an expanded audience.

As I approach the one-year anniversary of Birmingham Shines podcast, I’ve been exploring whether to give it a few more months or issue a fond farewell. I’ve decided my answer. Stay tuned.