Are You A Cat In Gloves? 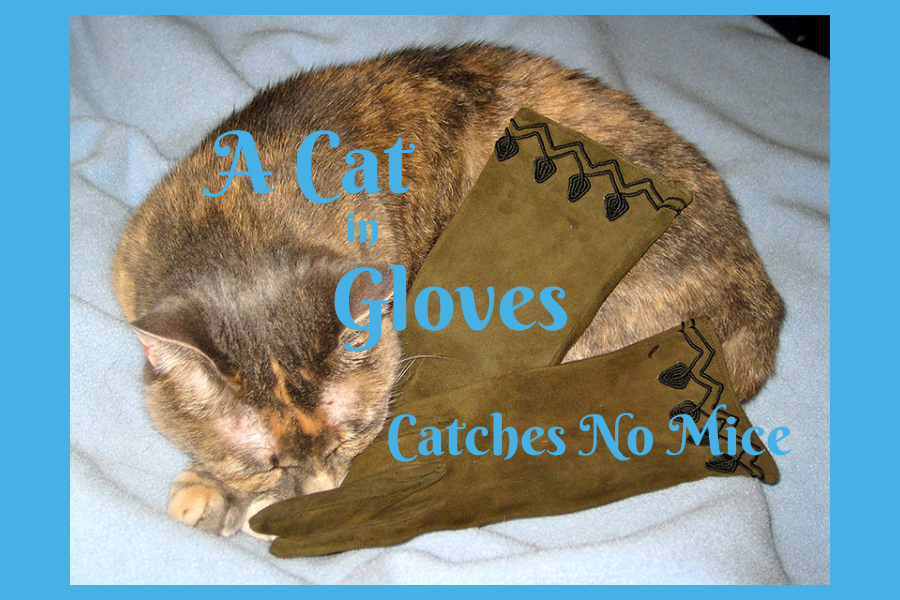 It all started with earthworms. ‘Erms, I called them.

Or maybe it was a bunny rabbit.

My mother insists that I cannot remember the rabbit. She says I was much too young, not even a year old. I can see the rabbit, in my mind’s eye. Who knows if this a real memory or just my imagination?

It  might've been olives.

My mother says I loved them, even as a toddler. I can’t ever remember a time when I didn’t love olives.

Earthworms, olives and a rabbit. Seemingly disparate, yet revealing a common thread.

I distinctly remember sitting on the edge of a pier grabbing a handful of night crawlers—fishing worms—from a bucket. My great aunt and uncle, Maedru and Tab, were fishing and watching me while my young parents waterskied on Wilson Lake on the Tennessee River. I was curious.

It’s the core of who I am, my defining character trait.

Curiosity is why I can’t stop learning, why I’m never bored.

In a world where the powers-that-be insist that we play by institutionalized rules and conform to a pre-defined, “normalized” structure, curiosity can be a detriment.

A tiny bit of curiosity is tolerated—they say it shows interest and commitment. But stray across a narrow boundary into a paradigm where silos are ignored and chasms traversed and the curious label will brand you with a mark akin to Hester Pryne’s scarlet letter A.

That’s because curiosity leads to exploration and discovery and makes it possible to connect dots that the less curious are unable or unwilling to see.

Disruption of the status quo means uncertainty and change. And, at least potentially, a change in the power structure. Power brokers allow the reshuffling of deck chairs on the Titanic because it “looks like” creative problem-solving but they always try to squelch real creative solutions. We see this scenario play out repeatedly through faux corporate reengineering, government finance negotiations and academic curriculum revision initiatives.

The demand to normalize and conform to the status quo makes those who are inherently curious and creative problem solvers feel somewhat like Harry Potter confronting the death-eaters.

That’s because the cat was disturbing the status quo.

Think about the context in which that phrase is most often used. It’s when kids are asking too many questions. It has nothing to do with actual cats. It’s a metaphorical statement.

[Tweet “Curiosity killed the cat because the cat was disturbing the status quo.”]

When I was working on my first Ignite Birmingham talk a few years ago I ran across what has become my favorite Ben Franklin aphorism:

A cat in gloves catches no mice.

A cat in gloves is not curious.

A cat in gloves is not brave.

In January of this year, as I continued to reflect on my first 50 years and where I wanted to go in second half of my life, I spent time digging into finding my why. See Simon Sinek if you don't know what I'm talking about.

Everything kept coming back to a sense of wonder, exploration, discovery, driven by my intense curiosity.

I became a lawyer because the Enlightenment and Renaissance-era thinkers that I admired had usually studied law and it seemed to offer a financially-comfortable pathway where I could explore ideas while helping others.

I studied journalism and became a writer because it was a practical opportunity to learn something new through every interview and story.

I became a college professor because I needed to explore, discover and feed my curiosity. I wanted to inspire students and others to become curious and seize the opportunities available to us today.

I became a beekeeper because nature amazes me, inspires me, teaches me.

I teach because I want to inspire others to ask the questions that require answers beyond the superficial explanations and justifications given to keep them/us trapped on a hamster wheel in a false reality feasting on fistfuls of blue pills.

At this point, I find that most people still prefer the blue pill because they believe the status quo offers security and comfort. But I’m optimistic enough to believe that I can lead at least a few others out of the matrix, onto a path to a happy life where we get to discover a new world and a new way, [be]inspired, grow and shine. No pills required.

Have you started to wonder if perhaps you are in a matrix designed to numb you into acceptance of your “lot” in life?

Have you let structures, routines, and chores overpower the curiosity you had as a child?

Have you realized something is awry and are looking for change?

Will you join me on the path?